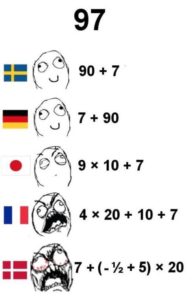 First, let’s look at the counting system in each language introduced in the picture.

English expresses 97 like Swedish, (90+7:ninety-seven). As you can see from the chart, the first three look easy and rational, but it starts being complicated when we get to French or Danish. This is because Danish and French use the vigesimal system to express numbers between 80 to 99 (French), and 50 to 99 (Danish). As for French, some French dialects do not express with the vigesimal system.

Some french dialects do not use 10 or 20 as bases of numbers, they use obsolete way to count numbers from Old French.

As you can tell from the chart, in Danish, they use vigesimal to express numbers between 50 to 99. (indstyve) is usually omitted but, “sindstyve” means (x 20), and they only leave “s”.

As you can see from these 2 charts, their counting system is somewhat complicated because of the usage of the vigesimal. This system is also applied in many other languages especially in Europe and many other languages in the world. In English, historically, we used “score” to mean “20” and it is used to express larger numbers with the base form score

Venti/Trenta? From what language did Starbucks name sizes?
Next

Why do they call "blue traffic light" in Japan?
Prev

Some Aboriginal languages in Australia l ...

Why do they call “blue traffic light” in Japan?

Do you know where the names for the size ...

You probably know that "media" and "data ...