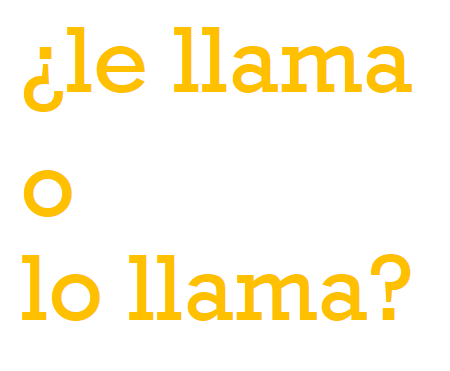 As you already know, there are indirect (IO) and direct object pronouns (DO), and we know when to use which by seeing the relation between the verb and the objet of a sentence. However, there are special verbs that can be used both with IO and with DO.

Usually, we think about meaning of a verb to decide if it takes IO or DO. To use “decir” as an example, this verb has to take IO and DO since it means to tell something to someone. As you can see, it is clear that two objects are completely different things, and they are not interchangeable in this sentence. Nevertheless, these verb can possibly take both IO and DO with almost no change in their meaning as a sentence.

Avisar to let someone know (avísale/avísalo/avísala)

Ayudar to help somebody (ayúdale/ayúdalo/ayúdala)

Llamar to call someone (llámale/llámalo/llámala)

Saludar to greet somebody (salúdale/salúdalo/salúdala)

※Although these verbs are common ones, there are many more verbs that can take both IO and DO.

These verbs are called leísmo aparente “apparent leismo” and they are commonly used almost interchangeably with both IO and DO. These verbs are all used to take dative (IO) in Latin, but regionally people started using it with DO and became much more common now.

Expressions with Tener
Next