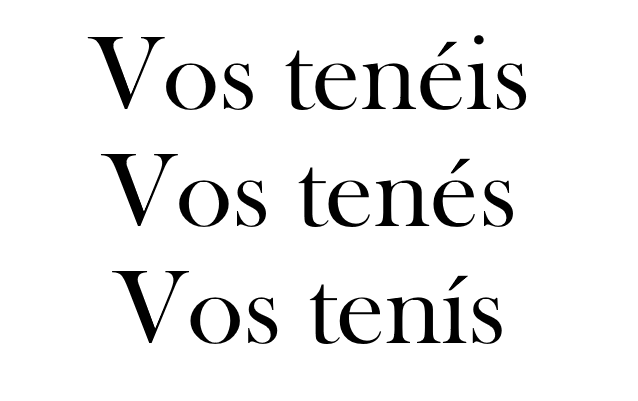 Do you know that there is another 2nd person singular personal pronoun “Vos” other than tú and usted? Of course, “tú and usted” mean “you” in English, but vos is also used although it is less common and it is considered more informal and dialectical expression. Vos is used differently depending on the country with slightly different meanings, usage, conjugation and pronunciation of the conjugated verbs.

When I saw the word “vos”, the first thing came to my mind was “vosotros”, and I thought they meant vosotros but they just made up the word “vos” which is smaller and easier to pronounce. Even though my assumption was not exactly right, I found out that vosotros and vos were closely related.

In spite of the fact that “vos” is used as a dialect, the word itself was used like “you” in English which can mean singular and plural “you”. “Vosotros” was born from the word “vos” in order to clarify whether they talk about multiple people or one people. So, vosotros was made by sticking “otros (others)” to vos. Vos was originally “you” plural in Latin, but, when they had 2 emperors at the same time in 4th century, they referred them to mean plural of course, then they started using it to the emperor they had after. This is just a theory, but originally the word itself was plural.

Now, let’s look at the usage and differences in using “vos” among Spanish-speaking countries.

Mainly, there are 4 types of different verb conjugation for vos.

※Voseo is tendency or preference of using “vos”

Venezuela: In the northeast part of Venezuela, they use Type 1 Voseo and more people use it as you go further to the north east. Sometimes, they do not pronounce or aspirate S that is in between other letters or at the end.

West Bolivia: In Bolivia, they use the different type of vos in different regions within the country. In the west, people use both vos and tú, and tú is considered to be formal and used in documents.

Panama: In central Panama, and by the border with Costa Rica, voseo can be seen. They sometimes use tú as a subject with vos conjugated verb.

Cuba: In northeast Cuba, they also use “vuestro” and “os” in addition to the use of vos.

Ecuador: In Central and north part of Ecuador (except for capital), vos is used, but conjugated like tú (vos eres, vos tienes).

Chile: Type 2 vos is used in Chile, and the letter “S” at the end of the –ar conjugation is never to be pronounced neither written. (vos/tú pensái, vos/tú trabajái)

Bolivia: In south part of Bolivia, tú is acceptable in formal situations even though people use type 2 or 3 vos in speaking.

Argentine/Uruguay/Paraguay: People always use vos with no usage of tú. It can be used to anybody in these countries.

Costa Rica: Vos is only used among very close friend or family members, and usted is used if they are not so close or to strangers. Tú is barely used, and it can be said that vos is used for tú as well completely.

El Salvador: In El Salvador, they use all vos, tú, and usted, and vos is only used with family members or close friends.

Guatemala/Honduras Just like El Salvador, people only use vos among close friend and family members, however, the use of vos is more common among men and women tend to use tú. Despite this, it is still common to use tú or usted when they talk with strangers.

Nicaragua: Informally, vos is used and tú is used formally.

Mexico: Southern states like Chiapas State in Mexico, vos is used although people from the other part of Mexico see it as “uneducated” or “low-class”.

If you ever have a chance to go to one of those countries, why don’t you try listening to their accent and usage of vos! It might be very interesting and funny to hear them speaking a little differently from the other part of Spanish speaking countries.

Verbs with Stem Change
Next

Various ways to say "You" in Spanish
Prev