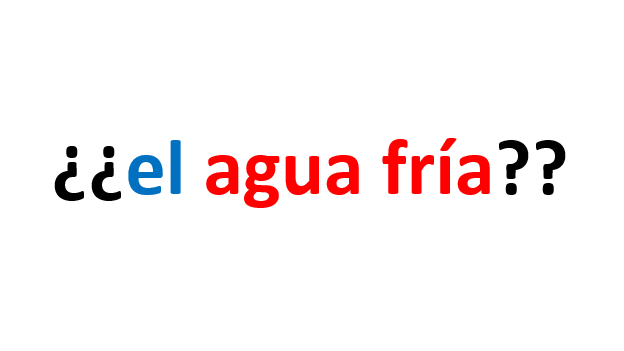 As you all probably know, most of the word ends with “a” is feminine, and of course, they take la/las/una/una as articles right? Agua is a feminine word, and it is very logical to think that this word, agua, uses feminine articles. However, this word does not take singular feminine articles, and instead, this word takes masculine singular articles.

For example, these words require to use masculine articles.

If the first “a” is not atressed, you can just use the usual feminine articles.

We do not have a lot of words like this in fact, but these two words above are very common words and I do not think it would do any harm remembering the rule for them.

Actually, French has kind of similar function. In French, when they want to say “my female friend”, they would use masculine “my” for the sake of pronunciation. Usually, if “my” modifies a feminine noun, it should be “ma” and “mon” if it is masculine. But, they say “mon amie” to avoid the double “a” thet do not sound good to the French ears.

Did you know there is a non-Spanish-lang ...